Since joining Varsity in the latter part of 2008, Steve’s highly affable character has meant that he settled in very quickly to the team and with customers alike. His role in supporting mainly northern based customers has added new focus and additional strength to the Varsity external sales team.

Being Varsity’s only University educated member of staff, Steve graduated from Leeds University with a Degree in Economics. He then went on to join a graduate training program with Jefferson Smurfit Group in 1991. This training gave Steve grounding in all aspects of the packaging business, spending time in sites all over the UK and involving himself in sales, production and finance. Steve joined Warren Board in 1993 and subsequently joined Day Paper in 2004.

Steve has been a fan of Stoke City since 1977 and is a season ticket holder. He describes it as an unhealthy obsession. He has been smiling and grimacing  over the past few years with promotion to, and and then relegation from, the Premier League. Steve manages a junior boys football team and has gained his FA coaching badges and also enjoys off-road mountain biking.

A full on Potters fan until the end. 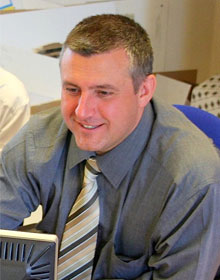