Simon joined the Team in March 2015 and has grown and developed the Southern Sales area significantly in that time. With his open and friendly nature he has quickly settled into life at Varsity.

After a career in retail Simon initially joined as an internal member of staff at Hedsorboard. Within a year he was promoted to an external Sales role. After 6 years with Hedsorboard Simon went to work for Price & Pierce – a Paper and Board Agency representing paper and board Mills in South Korea, Italy and Sweden. Simon then spent 10 years working in External Sales for two UK Board Merchants before settling here at Varsity.

A keen mountain biker Simon is out most weekends (weather/wife permitting!) and has successfully ridden from London to Paris over 4 days with a group of friends. Altogether they raised a staggering £12,000 for charity.

He has also been playing 5-a-side football weekly for over 30 years (There must be a record for that somewhere). He plans to continue for at least the next 10 years – knees allowing! Alongside these sporty hobbies he can be found pottering in the garden and enjoys eating out and trips to the cinema.

Simon is a ‘tractor boy’ – The Mighty Ipswich Town (His words) 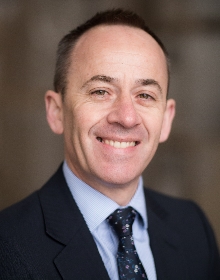