In his role at Varsity’s helm, Andrew has overseen and enjoyed contributing to the company’s dramatic growth and business development.

Starting his working life as an industrial services trainee in the water treatment industry, Andrew entered the world of sales in the board industry with Hedsorboard in 1982, rising quickly to become their Southern Sales Manager. This was followed by three years as General Manager with a paper merchant, which led to him joining Varsity as General Manager in 1992. Andrew was appointed as Managing Director in 1996.

Andrew is married with 3 boys. Suffering from a long term knee injury himself, Andrew likes to keep fit by walking and cycling and enjoys regularly eating out.

A lover of live entertainment, Andrew regularly attends music and comedy nights. Through thick and thin, Andrew has been a keen supporter of Fulham for over 40 years and is a season ticket holder. 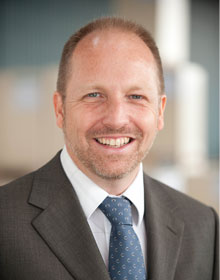